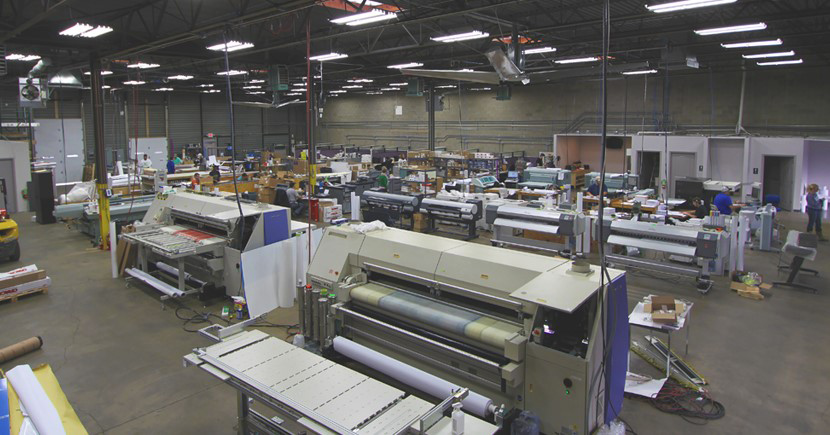 Printscape Imaging & Graphics’ motto is a confident “Yes, we do that.” Printscape can tackle almost any project thrown its way because virtually every equipment purchase that owner and CEO John Dziak makes brings unique capabilities to differentiate the Pittsburgh-based firm from competing shops.

Take multilayer printing, for instance. Dziak was drawn to the overall versatility of the SCREEN Truepress Jet2500UV. When Dziak saw the hybrid roll and board inkjet printer produce deeply textured images, he was absolutely sold.

“When it comes to ‘bang for the buck,’ the Truepress Jet2500UV is one of the best values and most versatile machines on the market,” Dziak said. “It is capable of so many high-quality print applications at 1,500 dpi. But being able to print up to 21 layers of ink in perfect register was the hook that really got me. Multiple layers allow Printscape to sell a totally distinctive application.”

To create a four-color dimensional piece, the inkjet printer repeatedly lays down black ink, building the raised area to the preferred height. A layer of white ink covers the thick black layer and allows for the full color gamut when printing the four-color image. The final step prints the finished CMYK image. Printscape now markets the realistic three-dimensional effect on the Truepress Jet2500UV as “Color You Can Feel.”

Printscape is dedicated to its brand identity. The onetime copy shop, known for many years as Washington Reprographics, outgrew its niche — reproducing drawings for architects and engineers — and with it the old moniker.

Dziak joined Washington Reprographics in 1988 as a salesman and acquired the company in 2004. Instead of pinning the business’ fortunes on the cyclical building sector, Dziak chose to build up the graphics portfolio and build out into a wider geographic area. By 2011, digital printing, online document management and creative graphics solutions for interior design, retail and public venues dominated the work of the newly rechristened Printscape.

A total of 54 employees staffs three locations, in Pittsburgh, Canonsburg, Pa., and Morgantown, W.V. The company runs 20 hours a day, generating $6 million in annual sales. Its clients hail from across the United States, parts of Canada and several international markets, such as Norway, Spain and France. Major accounts include national retailers, casinos, public sporting arenas and art exhibitors.

Since 2011, the first of two Truepress Jet2500UVs that Dziak acquired has put in 16-hour days with flexible and rigid substrates ranging from 8-foot-wide roll-to-roll vinyl to glass sheets on the menu.

“We shopped around quite a bit, attended trade shows and visited demonstration centers before settling on the Truepress,” Dziak said. “It always came back to versatility. You can print just about anything with this machine.”

The second Truepress Jet2500UV went into operation in October 2014 to coincide with the launch of Printscape’s new downtown Pittsburgh headquarters, whose wide-open design maximizes efficiency and throughput in the 18,000-square-foot space.

“The Truepress Jet2500UV is a key component of our operation, so much so that we decided to expand to a second device,” Dziak said. “We wanted the combination of redundant capacity and improved production efficiency. One Truepress can be running clear film, while the other runs board. The resulting scheduling flexibility opens up a lot of opportunities.”